The 21st Century Library and Heritage Plaza is the most environmentally sustainable public building ever to begin construction in Hayward. The new library will be 100% solar powered, and the new plaza will feature a significant rainwater recycling system, an important consideration in drought-prone California.

The Heritage Plaza renovation plan includes an innovative underground rainwater catchment and recycling system that will save and recycle 400,000 gallons of rainwater per year. The water will be filtered and treated then used to flush toilets in the new library and irrigate the trees and landscaping in the plaza.

We are happy and proud to announce that last night the Hayward City Council approved the 21st Century Library and Heritage Plaza project and awarded the construction contract with NO delays and NO last-minute changes to the design!

Your voices made the difference. Over 1,200 petition signatures were collected in ten days. Over 300 well-written comments supporting the project flooded in. Thank you!

When we presented the petition and comments to the City Council last night, it was an impressive sight. The packet was 56 pages thick, and every page was packed with your signatures and comments. Thank you!

Dozens of supporters turned out in person at the City Council meeting last night and spoke passionately about the years of effort and extensive community outreach that went into designing this project. Thank you!

We have never felt so humbled and fortunate to be a part of such an amazing community of neighbors and volunteers, as we did last night.

We thank Mayor Barbara Halliday for her awesome leadership and her strong vote in favor of the project.

We thank Council Member Al Mendall for his strong support and for so eloquently making the motion to approve the project with no delays and no changes.

We thank Council Member Marvin Peixoto for his unwavering support, for seconding the motion, and for his incisive comments about fiscal responsibility and the need to approve the project with no changes or delays.

Our gratitude also goes to Council Member Greg Jones for his vote in favor of the project, and for his insightful comments about the deep and lasting benefits the Heritage Plaza will bring to Hayward.

We are grateful for the positive vote cast by Council Member Elisa Márquez, and for her clear and concise comments about the lasting value of this project to Hayward.

Council Member Francisco Zermeño asked to "split" the project in two so he could cast his vote against the plaza restoration and old library demolition, while also preserving his public stance of supporting the new library. City staff advised that the consequences of "splitting" the project at this stage would be severe -- by law, all bids would have to be rejected and the entire project would have to be redesigned and rebid, resulting in a delay of several months and adding millions of dollars to cost. Ultimately, Council Member Zermeño reluctantly voted in favor of the motion.

The final City Council vote was 6-1 in favor of the awarding the construction contract with no delays and no last-minute, costly changes. This is an incredibly positive outcome and represents a giant step forward for the Hayward community.

Our deepest gratitude goes to all of you, our Friends, who showed your support though this petition, by writing letters, talking to your neighbors, and by speaking passionately to the City Council last night.

The 21st Century Library and Heritage Plaza Arboretum is now officially a dream come true -- thanks in no small part to YOU!

The groundbreaking ceremony will take place on Saturday, October 3, 2015. Please save the date and plan to attend this momentous occasion for Hayward.

The 21st Century Library and Heritage Plaza Arboretum is now officially a dream come true -- thanks in no small part to YOU!

The groundbreaking ceremony will take place on Saturday, October 3, 2015. Please save the date and plan to attend this momentous occasion for Hayward.

Open to the public. All are welcome to attend.
More details and program to follow. 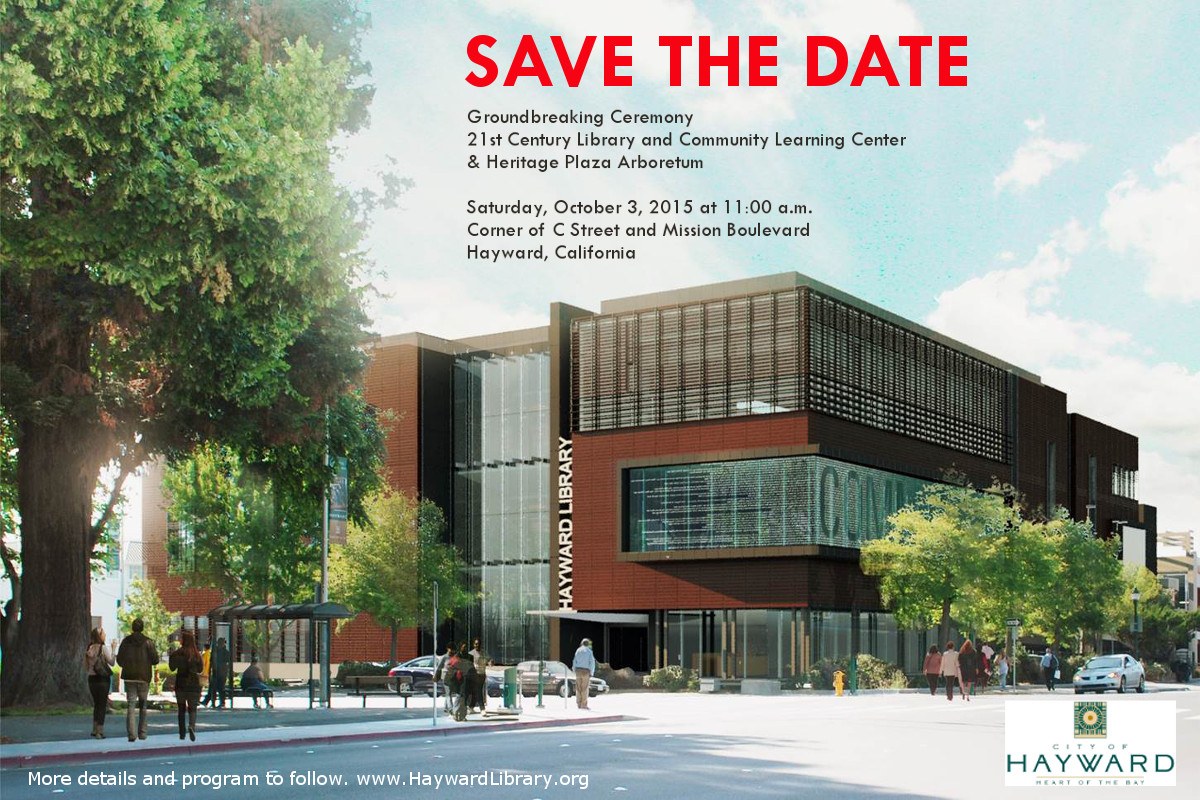 We ask you to please sign this petition to show your support for Hayward's 21st Century Library and Heritage Plaza Arboretum. This much-needed and long hoped-for project is under attack, and we need your help to save it!

Many people in Hayward have worked very hard over nearly 20 years to make this groundbreaking project a reality, including Friends of Hayward Library, Hayward City Council, and thousands of community-minded volunteers and neighbors like you.

Thanks to Hayward voters who in 2014 overwhelmingly approved Measure C by a 2-to-1 margin, the project is fully funded and we are poised to break ground on a beautiful, modern, environmentally sustainable new 21st Century Library and Heritage Plaza Arboretum for the entire Hayward community to enjoy for generations to come.

But now a small group of people have decided that they want the City Council to change the project at the last minute, essentially to cast aside and disregard the work done by thousands of Hayward residents who participated in the many public design workshops and surveys that were held over the past seven years.

These latecomers want to eliminate the Heritage Plaza Arboretum from the project. Not only would this deprive Hayward of its historic central plaza for all time, but it would actually increase the overall cost to taxpayers by up to $8 million. They also want to eliminate the rainwater storage system and throw away the chance to save 400,000 gallons of rainwater each year, during the worst drought in decades.

Why do they want to do this? Because they want the City Council to give them the old, deteriorating library building for free – a building which needs an estimated $4 million to $8 million in repairs, and which costs Hayward taxpayers over $200,000 per year for upkeep alone – so this small group of people can use it for their own special interests.

Please help us save the project that so many people worked so hard over so many years to create. Ask the City Council not to throw away the input of thousands of Hayward residents who contributed their time and energy to this design. Ask the City Council to approve the project with no last-minute changes pushed by a small group of special interests. You can help by signing our petition, which we will present to the Hayward City Council on September 15, 2015. 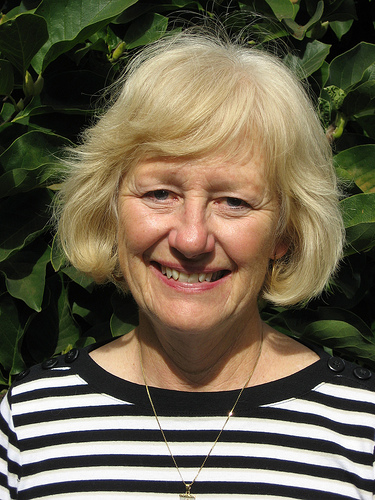 We, the Friends and the citizens of Hayward, stand on the brink of a new future for our city and community. We will finally witness the groundbreaking that will initiate the construction of our 21st Century Library and Community Learning Center. This exciting event will take place in September and begin the construction of the facility that has been over ten years in the making. To take part in this historic event I am asking all of you to renew your membership in the Friends and to each get a friend to become a Friend. You are our heroes and we want all of you present on this exciting day.

At last we will have an appropriate anchor to a newly revitalized downtown— the Heart of Hayward, the Heart of the Bay Area. The new library will bring over a million people our new Heart and generate business that will make the city proud. Our new library will be a LEED Platinum facility using Net Zero Energy, significant rainwater capture and re-use, and reducing the city’s carbon footprint.

Finally we will have adequate facilities for elementary and secondary Homework Help Centers, adult literacy programs, community education programs, innovative digital media education for citizens of all ages, public meeting rooms, lots of materials (both print and electronic) to serve all of our community. We will start out with 50,000 volumes with room to add another 80,000 as the years progress. Our 21st Century Library and Community Learning Center will be exactly that—a resource for all.

In order to get there we will continue to use the resources you provide in material donations, volunteer hours (we’ll need many more to work in our new store), and extra funds for programs such as After School Homework Centers, a Digital and Computer Learning Center, and a bigger opening day collection. Stay tuned for more detailed information on volunteer activities that include book store management, online sales, newsletter production, web development, public relations to name a few.

Here are a few easy ways to donate to the Friends: sign up for AmazonSmile (smile.amazon.com) and put Friends of the Hayward Public Library as the 50lc (3) as your charity. Pick up S.H.A.R.E.S. cards at our book sales and show them when you shop at Lucky’s, Food Maxx, Save Mart or Smart Foods—we get 1 to 3% of your purchase. Check out the Best Seller lists for both adults and children and buy new copies to donate to the library—check with a librarian first see how many copies are needed. And last, but not least, we always appreciate your GENTLY used books for adults and children—but we can’t use damaged, moldy, torn, written in, falling apart books—Be brave and put them in your recycling at home!